Wealth with Responsibility: Healing and Preserving Our Oceans

The sea is in peril but hope remains. This was the overarching message at a virtual event held on Tuesday November 10 that brought together leading thinkers in ocean conservation and the blue economy.

Over two enthralling hours, some of the world’s leading minds in ocean conversation talked about the future of our oceans and what we as businesses, investors and individuals must do as a matter of extreme urgency. Our speakers covered a broad range of fascinating topics, including the following:

Investment opportunities in the blue economy

Julie Packard, co-founder of the Monterey Bay Aquarium, noted that the transition to green energy is creating investment opportunities in the blue economy.

For example, mangrove forests can play a huge role in sequestering CO2 while protecting communities from increasingly destructive storms and securing habitats for commercially valuable fish. Many mangrove and seagrass restoration projects are in their nascent stages and require investment for proof of concept. This can be provided by businesses who need carbon offsets.

The impact of climate change on the ocean

Professor Stefan Rahmstorf, government advisor, oceanographer and climatologist, described the ocean’s remarkable capacity for storing heat, and stopping it radiating back into the atmosphere. But we have reached a critical point.

An analysis of ocean temperatures is demonstrating a gradual slowdown of the Gulf Stream, which is leading to extreme weather, particularly in Europe. Melting ice sheets are accelerating a rise in sea levels, while coral reefs are gradually dying. And all of this is due to climate change.

His words were stark and his advice to investors was that in order to limit atmospheric warming to 1.5 degrees globally, most known fossil fuel resources need to remain in the ground.

Why the world needs a Paris Agreement for the ocean

Maria Damanaki is a principal adviser to several major foundations and a former European Union Commissioner for Maritime Affairs and Fisheries. She lauded the Paris agreement for raising awareness of climate change, but lamented the fact that people don’t feel a sense of urgency.

She also expressed her concern that, in a post-COVID world, governments may redirect investment from the environment and the ocean to cover urgent social needs. Without belittling those needs, she said that now more than ever it is critical for people, governments and corporates to come together and devise a Paris Agreement for the ocean.

While noting that the pandemic has meant major disruption to ocean-related negotiations and conferences, Karen Sack, President and CEO of Ocean Unite, was hopeful that 2021 might be nature’s "super year" thanks to increased collaboration between financial institutions, businesses, NGOs and coastal communities. The Ocean Risk and Resilience Action Alliance (ORRAA), for example, aims to “drive $500 million of investments into coastal nature by 2030”.

For millennia, she pointed out, nature has been developing and refining engineering solutions to hold back storm surges and filter out toxins and pollutions. As long as humanity invests in these natural systems, there is always hope.

Why the blue economy is already making waves with investors

The oceans produce at least $2.5 trillion a year in economic value, according to research by the World Wildlife Fund. This makes them equivalent to the world’s eighth-largest economy, explained Christian Nolting, the Chief Investment Officer and Head of Investment Solutions at Deutsche Bank’s International Private Bank.

The importance of environmental, social and governance (ESG) criteria has grown sharply in recent years. Even so, he said: “I’m honestly a bit surprised how much ESG, including oceans, is already influencing our day-to-day investments.” Research companies, for example, are increasingly refusing to look at companies that don't meet certain ESG criteria. “So we see massive trends and growth… and a lot of urgency already.”

With sincere thanks to our speakers:

Julie Packard co-founded the Monterey Bay Aquarium in the early 1980s and is one of the world’s strongest voices in ocean conservation.

Professor Stefan Rahmstorf is an oceanographer and climatologist who has published ground-breaking science on sea levels and ocean currents as well as being an adviser to the German government.

Karen Sack is the President and CEO of Ocean Unite, a non-profit organisation dedicated to safeguarding at least 30% of the world’s oceans by 2030, among many other conservation initiatives.

Maria Damanaki is a Principal Advisor to the Paradise Foundation (China), Systemiq (London) and Rockefeller Brothers Foundation (USA), having previously served as European Union Commissioner for Maritime Affairs and Fisheries.

Christian Nolting, Chief Investment Officer and Head of Investment Solutions at Deutsche Bank International Private Bank, was also on hand to explain why ocean conservation is critical from an economic perspective. 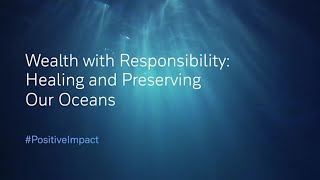 More about the blue economy
×